Easy route, particularly suited for families, which unfolds through villages and fields, huts and woods.

The small difference in altitude and the gentle slopes make for an easy and undemanding route. The green lung of Valle di Ledro, Val Concei, is mostly covered with trees and can boast the oldest tree in the valley, a huge beech tree, which gives its name to the refuge nearby (faggio means beech in Italian). Ideal for a relaxing break! In Winter the Val Sorda gets covered with snow as it turns into a cross-country ski course. 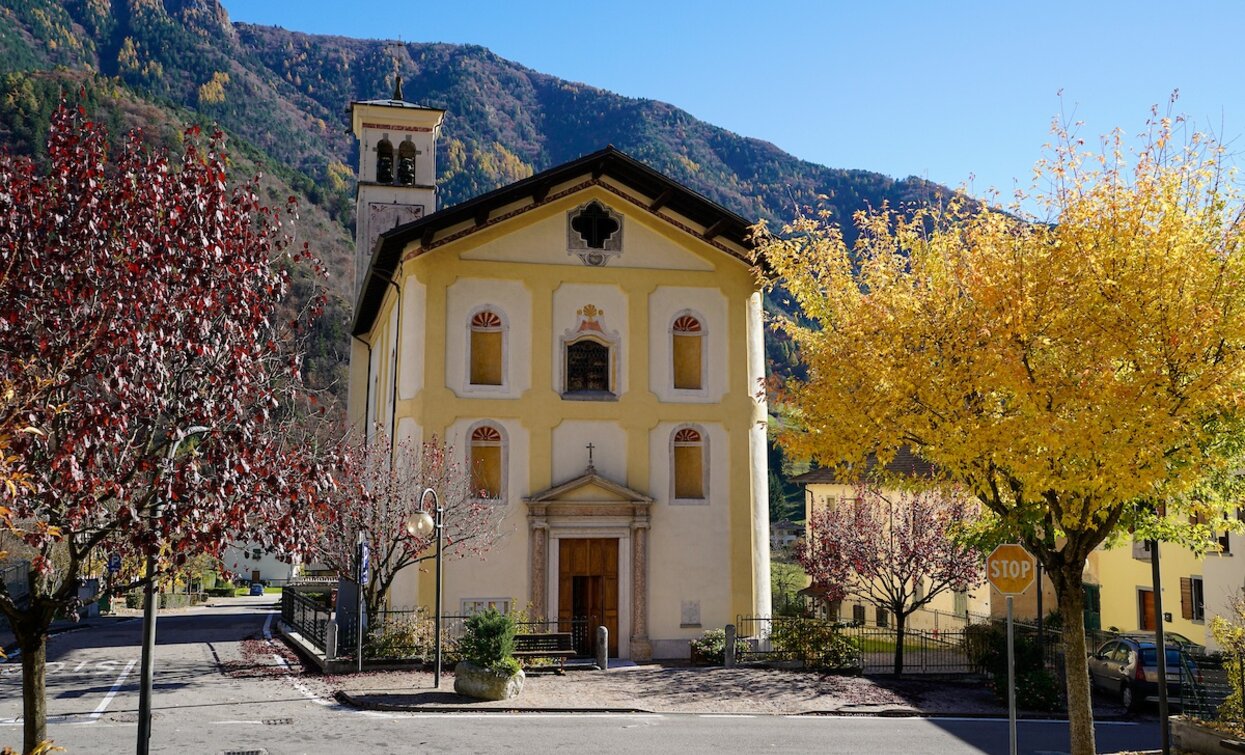 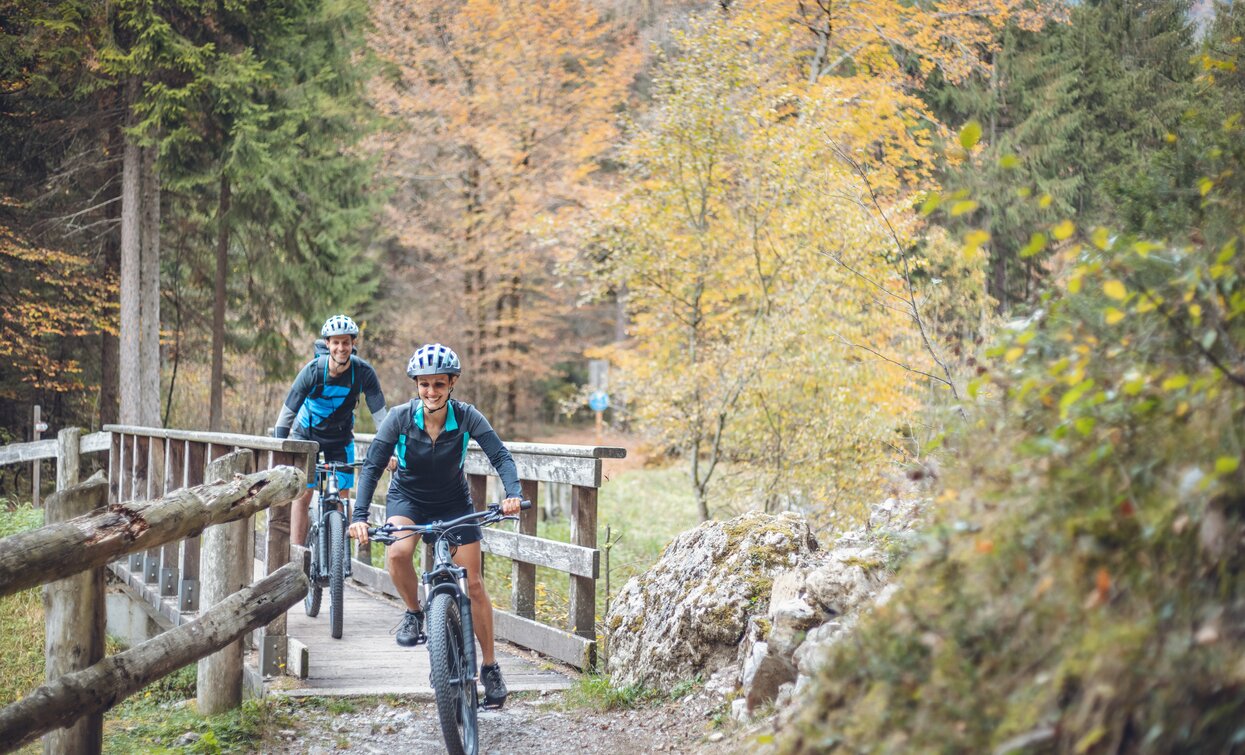 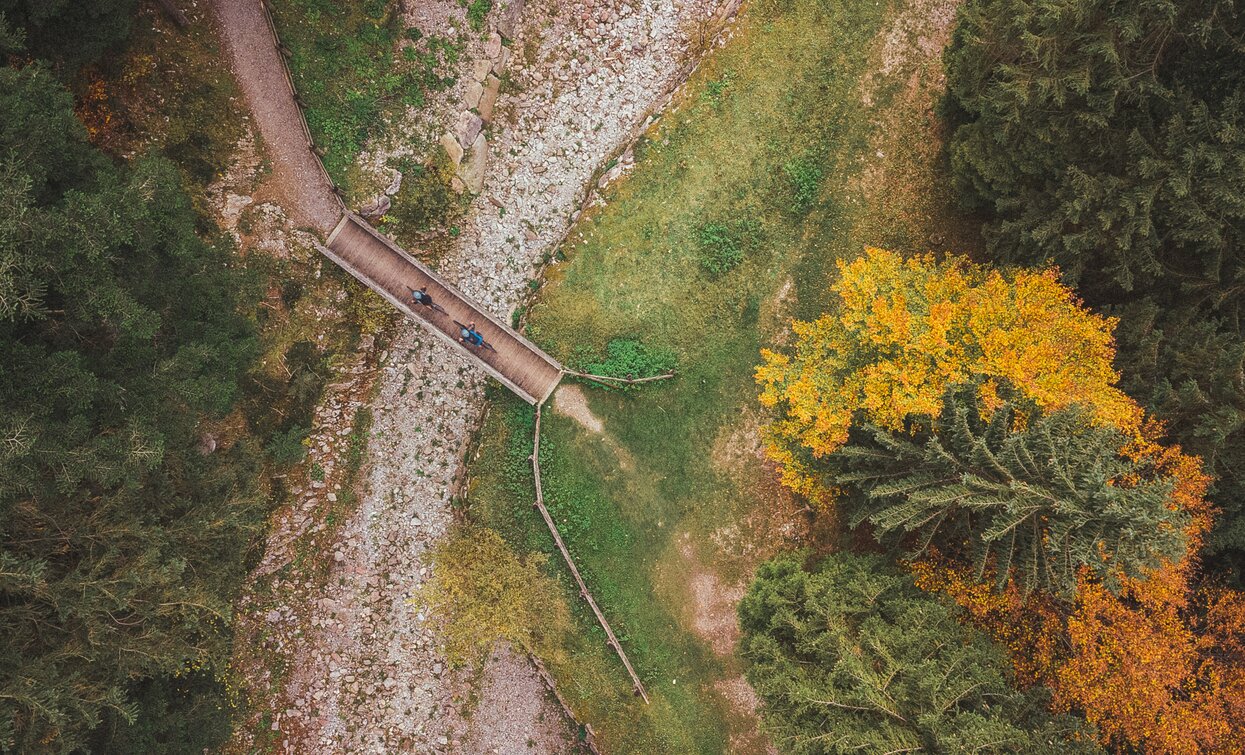 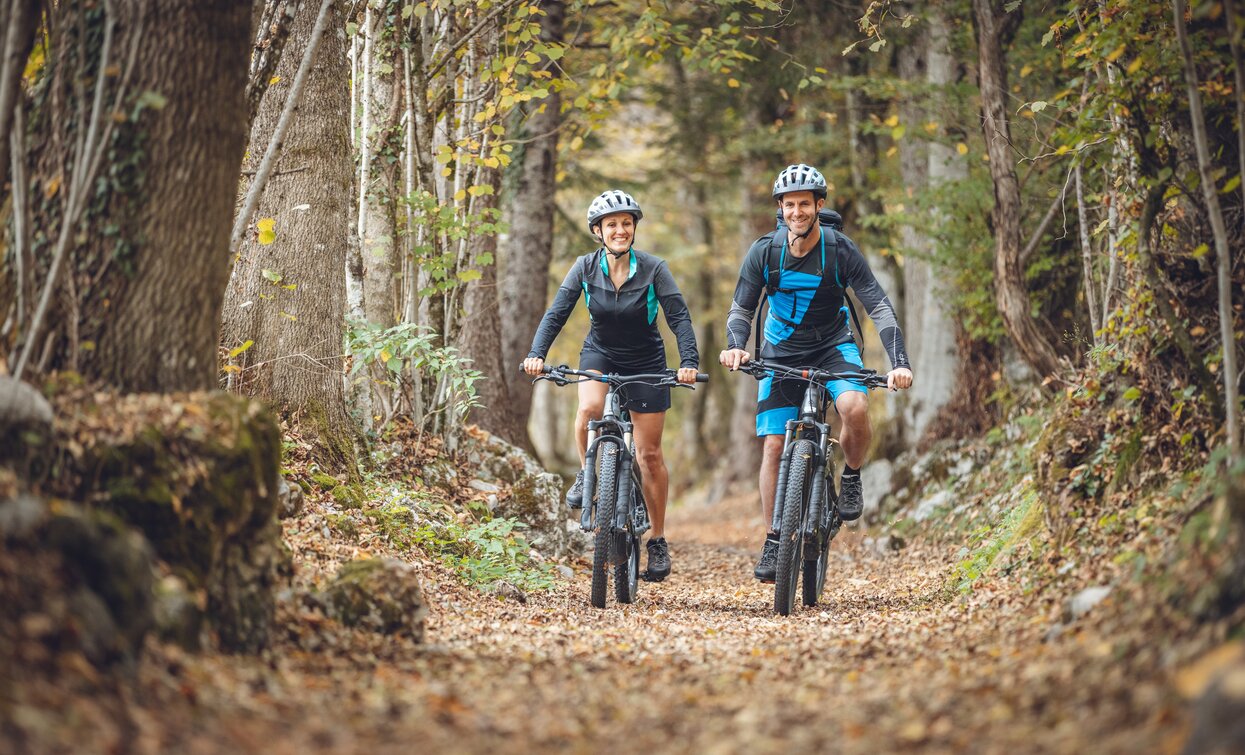 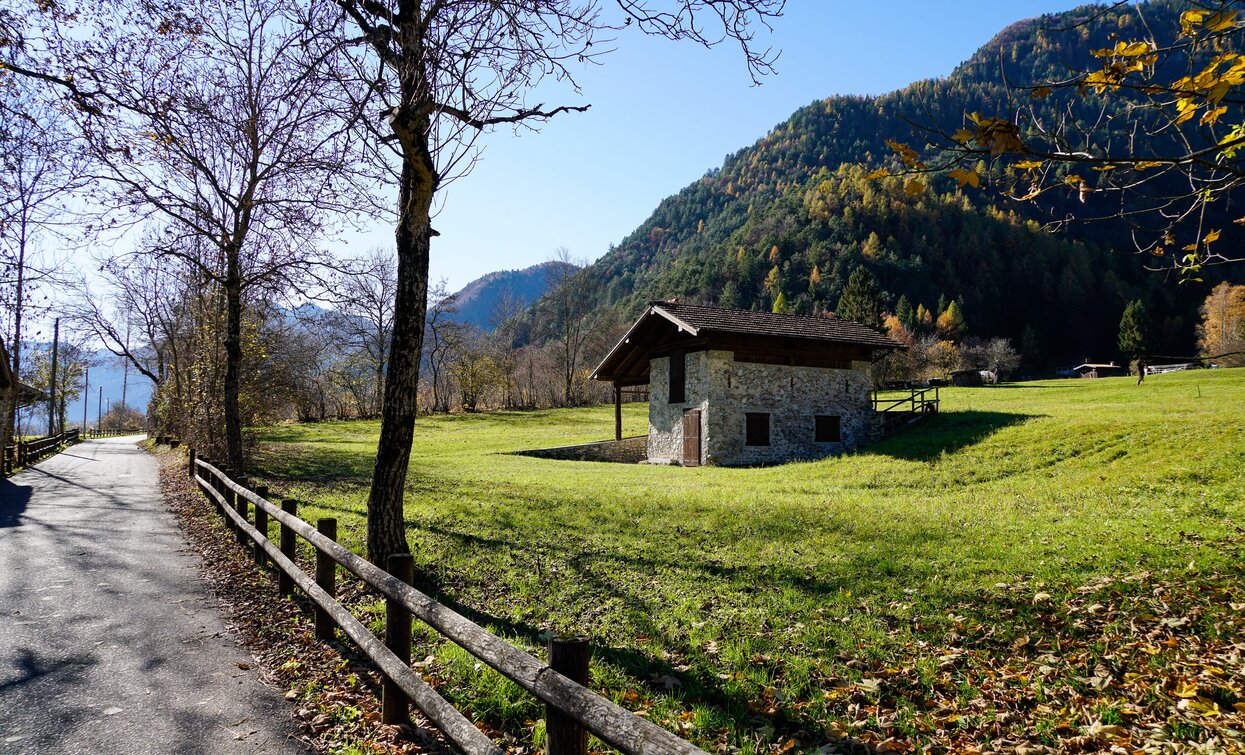 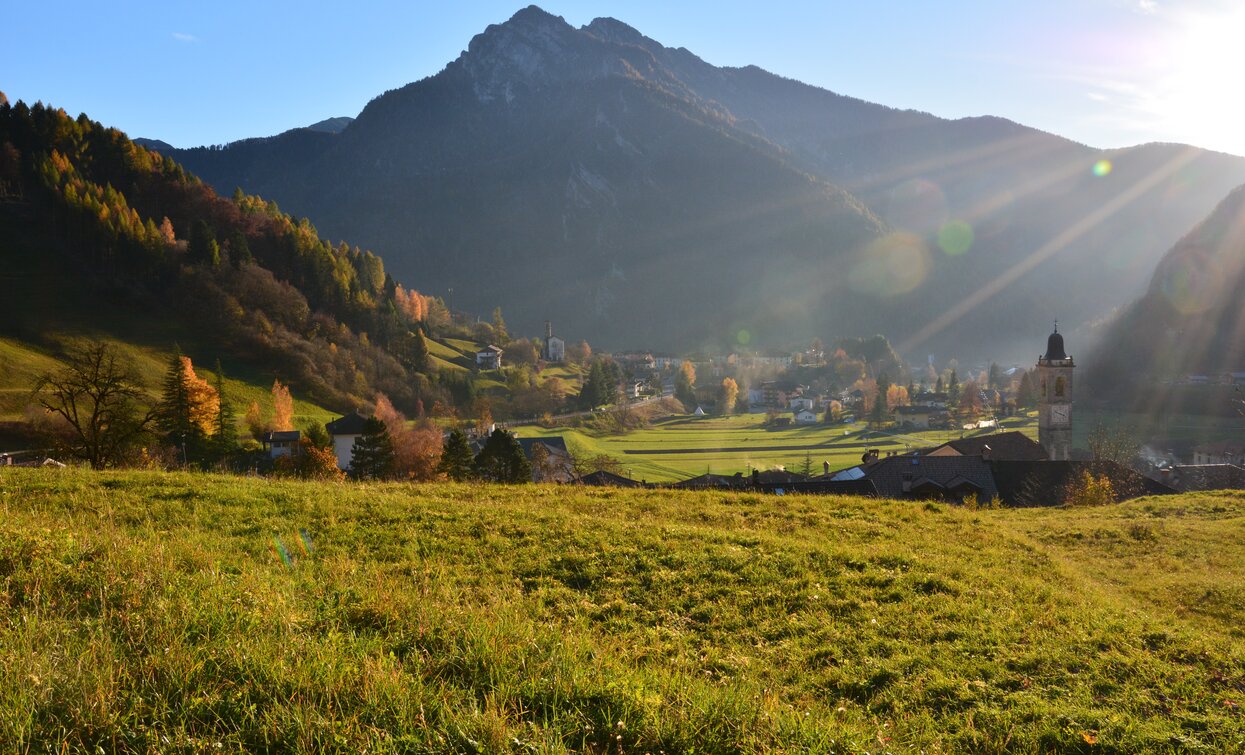 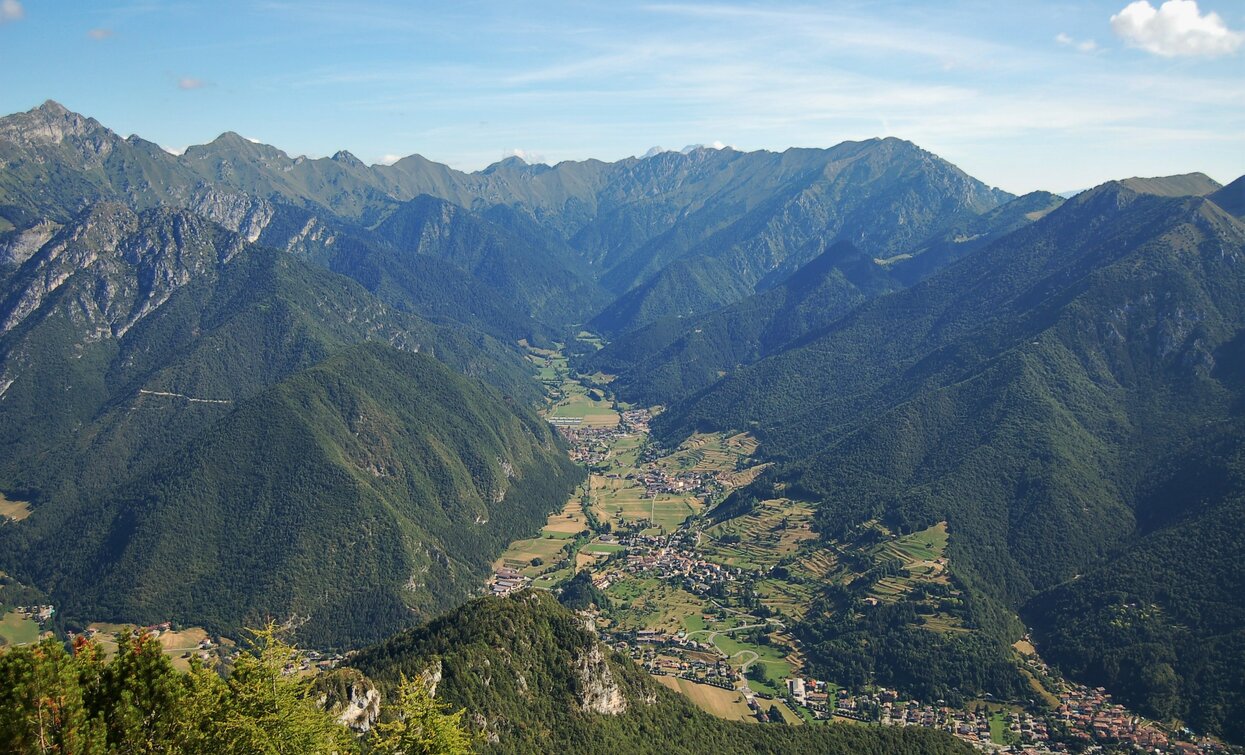 The forest in front of Rifugio Al Faggio is a magical place where you can wander among gnomes, fairies and sorcerers and meet the valley's guardian spirit, Gavardina the fairy. Her legend has inspired the sculptors of Leder Legn to create wonderful wooden works.

The ITRS is an objective way to assess trails and routes from a biker’s perspective, evaluating four aspects:

Discover more about the ITRS system and check the classification of this tour in the photo gallery.

From the car park beside the information office in Pieve, we continue along Via Imperiale and take the cycle path towards Bezzecca.  Immediately after the bridge we turn right, cross the main road and continue along the stream. Having reached Piazza Garibaldi we turn left into Via XXI Luglio and then right into Via Peluca. After the bend, at the camper van area, we turn left and take the provincial road. After about 200 m we take Via di Carpeà to the left. After the playground, we turn slightly right and take the small country road on the left. After a few metres, we come to a stone cross and turn left again. We continue along the tarmac road for approximately 500 metres and at the crossroads we take the small dirt road on the left. Once back on the tarmac road, we turn left and cross the small bridge, continuing on a small tarmac road, which joins the provincial road just before Lenzumo. We continue straight along the provincial road, passing the church of Lenzumo. Just outside the village we come to a wayside shrine and turn right onto a small tarmac road and after 400 m turn right again onto a dirt road. At a stone cross we turn left and then immediately right. We continue on a dirt track and cross the stream before turning left and skirting the water.  At the first opportunity, we cross the stream again and continue alongside it on the other bank. We cross the stream once again and continue straight ahead, moving away from the water. At the crossroads, we turn right and follow the small dirt road along the Val Sorda to Perigol, where the road continues to pass back through the valley in the opposite direction. At the first fork we keep to the left and at the second fork we turn right, after which we continue straight on, ignoring the bends until we reach the stream. We cross it for the last time and continue to the Fata Gavardina forest, just before the Al Faggio refuge.

To return to our starting point, we first follow the forest path alongside the tarmac road and then the road itself. After 500 m we come to a bridge and immediately afterwards turn left to follow the stream until we reach Lenzumo. In the village we first take Via dei Lach and then at the crossroads we continue straight on, following Via del Bò. At the wayside shrine we turn right and cross the provincial road, then continue straight on. At the crossroads we turn left into Via Bonomelli to enter Enguiso. Behind the church we take the narrow road leading to a small tarmac road that goes towards Locca. Having reached the stone cross already encountered on the outward journey, we turn left into Via Doghen and after a climb we reach Locca.  We pass the village keeping to the main road and at the first bend we take the tarmac road closed to cars that leads to Pieve. Having reached the village, we descend along Via Rabaglia and turn right into Via Cassoni to return to the starting point.

Parking between Via Imperiale and Via Nuova in Pieve, near the info point.