Difficulty
Intermediate
Activity time
3:30
Duration in hours
Distance
7.7
Distance in km
Suggested period
Jan
Feb
Mar
Apr
May
Jun
Jul
Aug
Sep
Oct
Nov
Dec
This is a long walk that will take you through the leafy forests that drape the sides of “Godesi”, (the north-western side of Mount Casale), a location rich in historic and cultural elements.
Itinerary: Comano Paese, Passo della Morte, Comano Paese.

Staff Garda Dolomiti S.p.A. Azienda per il Turismo VN, APT Terme di Comano-Dolomiti di Brenta
0100
Further information and useful links
Route info
Intermediate
Distance
7,7 km
Activity time
3 h 30 min
Ascent
299 m
Descent
547 m
Technical skills
Physical effort
Scenary
Highest point
883 m
Lowest point
373 m
Safety guidelines
The information on this chart is subject to inevitable variations, so this means that none of the indications are absolute. It is not entirely possible to avoid giving inexact or imprecise information, given how quickly environmental and weather conditions can change. For this reason we decline any responsibility for changes which the user may encounter. In any case, the hiker is advised to check the conditions of the places, environment and weather before setting out.
Punto di partenza
Comano Paese
Directions
Start in Comano, park at the church and pass “La Panoramica” hotel to reach the area where the Alpini (the Italian alpine army unit) hold their town fair. At the cross, continue straight ahead along a flat road through the forest, interrupted here and there by fields, until you come to a crossing signposted on the left SAT 411 for “Garda - Brenta” to Ponte Balandin and on the right Passo delle Morte. In front of you, you will see a grassy plateau rolling towards the river Sarca and towering above Monte Banale, Monte Valandro and Cima Ghez. Turn right and continue through a forest of pine trees, along a slightly uphill but pleasant path leading to “Caputèl de le Anime” (The Souls Shrine). The shrine appears to have been erected in the XVII century by the church devoted people of Comano in memory of the souls lost in Purgatory. It used to be decorated with a painting of Our Lady of Help, but following a recent restoration, the image has been replaced with an artwork realized by the local artist Paolo Dalponte. You may wish to rest here for a while, before tackling the steep sides of “Godesi” with a gorge and the Limarò Canyon on the left.  As you reach the first rock formations, the track becomes more arduous, flanked by a rocky wall on the right side and a cliff on the left, but you will be walking in complete safety because the road is protected by barriers made of metal and wood . Here, you stand on “Passo della Morte” (The Death Pass), the highest point of this itinerary (843m). This pass was, historically, the only way to cross over from Giudicarie Esteriori to Trento. The name comes from the local legend of Adilberto di Castel Toblino, betrayed and killed in this exact place by Graziadeo da Campo who was jealous of the romance between Aldilberto and the beautiful Ginevra di Castel Stenico. Continue walking downhill along a track that reveals, in some stretches, heart-stopping views of deep canyons at the bottom of which you can spot the main road, Strada Statale del Caffaro, and the river Sarca.  When you reach the crossing “Bivio del Casale”, you will see the SAT 427 sign directing you to the right towards Capanna Don Zio and Monte Casale and to the left to Sarche & Motte. Follow the latter and after few turns you can catch a glimpse of Casina Forestale, the Forest Rangers house. As you make your way through the vast plain, you will come to a farmstead “Malga-Maso Casale”. Here, you can continue along the SAT 427 path or re-join the dirt track you left earlier: both routes lead to “Romitorio”, a retreat for hermits, which was recently renovated. The Romitorio (452m) is situated on a vantage point affording spectacular views across the valley below, Monte Bondone with the “Cornét” peak and the “Piccolo Daìn”. After a stop to rest and admire the view, start your journey back along the same route. If you wish return via a different route, you can descend into the near village of Sarche from which you can catch public transport to Ponte Arche. In this case, we advise to park at Ponte Arche and walk to Comano.
How to get there
From Ponte Arche/Comano terme follow the signs to Comano paese (4km). When you arrive at the church turn right towards loc. panoramica.
Where to park
Near the church of Comano Paese or in loc. Panoramica.
There is nowhere to stop off for refreshments along the trail so you are advised to bring water and something to eat

Make sure you're wearing the right footwear for the trail and season. The going can get rough and rocky underfoot and a pair of hiking boots will protect you from sprains. When wet, a grassy slope, rocky slab or steep trail can be dangerous unless you are wearing the proper footwear. 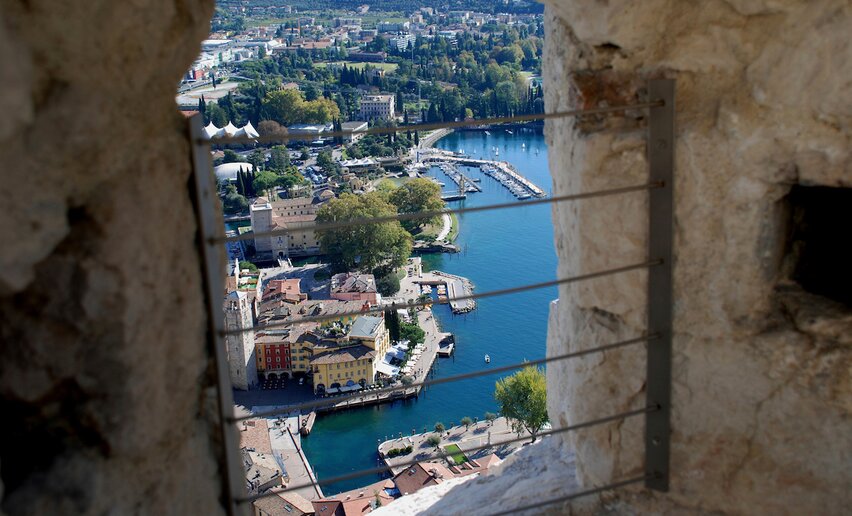