Wind + water
Weather reports
Back
Back

While Lake Garda boasts a shoreline of over 160 kilometres in length, it is the shores of Garda Trentino that are particularly popular with water sports enthusiasts. This is no coincidence, as the winds on the lake around Riva del Garda and Torbole sul Garda are truly outstanding in their intensity and consistency.
On days with good weather, the wind blows from the north in the morning, then changes direction at noon and thereafter blows from the south. This thermal pattern is due to the temperature differences between the surface of the lake and the high mountains to the north.
Lake Ledro also benefits from the influence of the Ora, which blows from Upper Lake Garda between the mountains at the mouth of the Ponale valley. Its winds are steady, but not too strong: ideal conditions even for beginners!

The main winds of Garda Trentino as follows:
VENT or PELÈR
This wind blows from the north for the first twelve hours of the day and covers a large part of the surface of Lake Garda, with the Pelèr also absorbing and feeding other, smaller winds. The wind usually starts blowing between 2 a.m. and 3 a.m., stopping around noon.
The Pelèr first blows mainly in the upper and middle reaches of Lake Garda then, as the sun rises, extends across the entire lake. The Pelèr is a keen wind that whips up waves and whose force will then break their crests. In the local dialect it is said that the wind “el pela” (i.e. “peels”) the waves – hence the name Pelèr. This north wind can reach speeds of up to 13 m/s.
ORA
The Ora blows from the south and is the best-known wind of the upper reaches of Lake Garda – renowned among surfers and sailors from all over the world. The Ora alternates with the Pelèr during the course of the day, which is why there’s always something blowing in the wind in Garda Trentino! The Ora blows from around noon until sunset and reaches its maximum intensity due to the orographic formation of the area, with the narrowing towards the north creating a "Venturi effect" in the upper part of Lake Garda. The Ora reaches speeds of over 10 m/s and can produce significant waves: it blows most strongly in high summer, while it is very weak in winter.
DA BALIM or BALINOT
This fall wind blows from the northwest to the shores of Lake Garda from the Ballino Pass via Riva del Garda. The Balinot blows at regular intervals: following a major drop in temperature caused by a thunderstorm or snowfall at higher altitudes, the Balinot can reach top speeds of over 20 m/s and cause even higher waves than the Pelèr.
PONALOT
The Ponalot is a typical, quite strong summer wind that blows mainly in the mornings and evenings from the Ledro Valley towards Lake Garda: it follows the course of the River Ponale, hence its name.
VINESSA
This wind blows from the southeast from the Veneto shore towards the Lombardy side of the Lake. The Vinessa is a periodic wind that can blow on two to three consecutive days, usually owing to severe weather in the Adriatic Sea. The Vinessa is foreshadowed by an intense bora in the region around Trieste on the Adriatic: the constant strength and
well-formed waves make it an excellent wind for windsurfing! 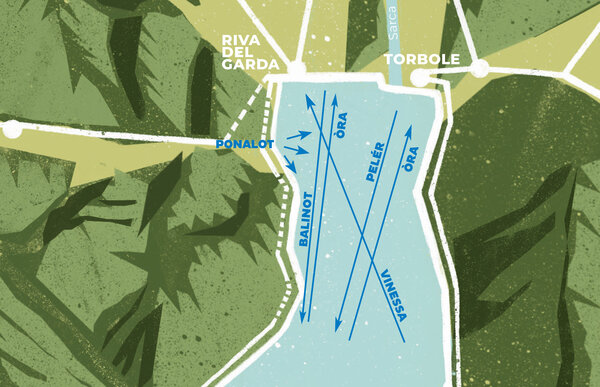 Lake Ledro
In the mornings and evenings, the wind conditions are changeable, whereas during the midday hours, the wind blows steadily and can reach a top speed of 8 kilometres per hour. At night, the Tramontana, also called "Vent" in the local dialect, blows up from the north.