This tour is one of the absolute highlights of Comano valley. Mount Gazza is the southern counterfort of Mount Paganella and offers an extraordinary view on the small lakes of Valle dei Laghi, on Lake Garda southward and, most of all, on Brenta Dolomites westward. Those tall stone towers  standing out in their majestic grandeur and  separated only by the narrow Molveno valley present us with  one of the most dramatic views possible.

After the departure from San Lorenzo, this tour begins with a short ride northward along an old road and - after a turn to the right into a narrow, flat dirt road departing nearby Nembia - continues with a slight ascent taking to the small village of Ranzo, at the foot of Mount Gazza. From there narrow roads with little traffic lead to the small village of Margone and, thereafter, a long, paved mountain road takes uphill till Malga Gazza.

After the above-mentioned mountain hut the big “panoramic adventure“ really begins. The dirt, partially paved road traces a hard uphill route, which then turns flat and - via a slightly uphill final stretch - eventually leads bikers to a lovely alpine meadow. The towers of Brenta are right there on the left, they are so close that they remain engraved in any biker's mind. This is an unforgettable sensation that can hardly be matched! After a short stretch on the downhill trail towards Passo San Giovanni (San Giovanni Pass), the tour continues along dirt stretches and through the woods, across the ski slopes and the bike parks of Paganella till reaching Andalo, a great holiday resort with numerous hotels, cafes, restaurants, shops and clubs. From Andalo a pleasant, easy trail takes to Lake Molveno, a magnificent turquoise-green alpine lake at the feet of Brenta Range. Here bikers ride on the beach and then on a dirt road through the forest, from where nice glimpses of the lake can be enjoyed. In Nembia they come across the outward journey and from there they can ride back to San Lorenzo via the clearly signalled bicycle path.

Punto di partenza
San Lorenzo in Banale
How to get there 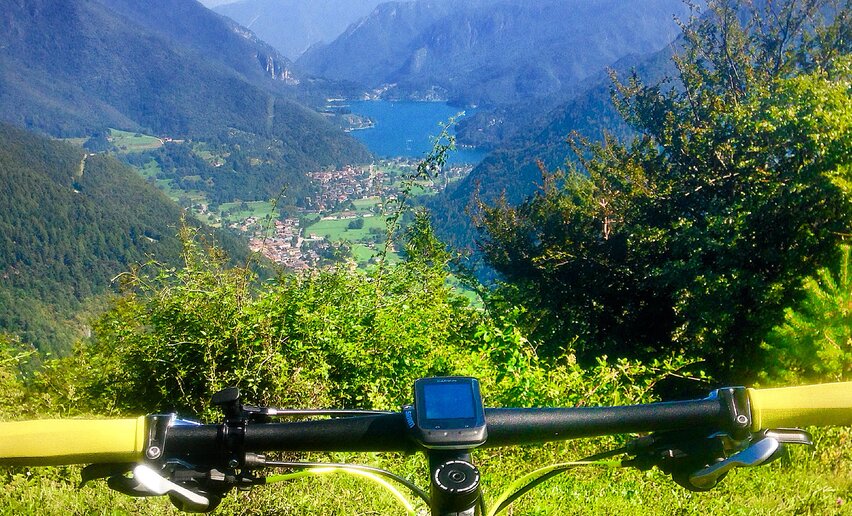